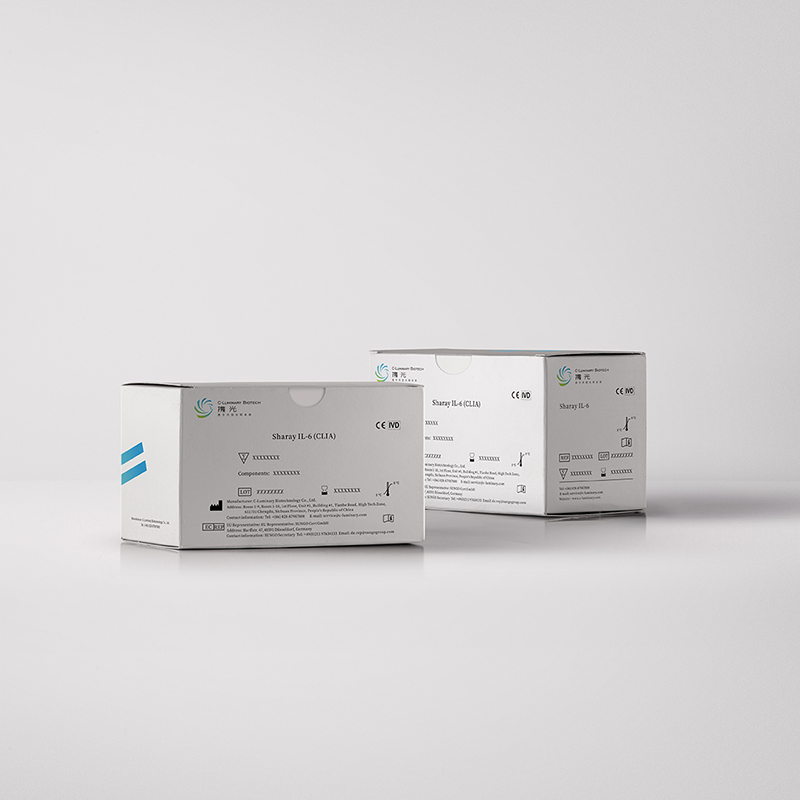 Interleukin is an inflammatory cytokine mainly produced by activated macrophages and peripheral neutrophils. The detection of interleukin can be used to monitor and diagnose bone diseases, inflammatory diseases, various cancers and many other immune diseases.

Human interleukin-2 (IL-2) has 133 amino acids and the mature form is a glycosylated globular protein of 15.5 kDa. IL-2 is mainly secreted by activated T lymphocytes. Myeloid and lymphoid DCs can also produce IL-2 in the presence of the IL-15 cytokine. IL-2 has an immunomodulatory role; it promotes the growth and development of peripheral immune cells when initiating a (defensive) immune response and keeps them alive as effector cells.

Interleukin-4 (IL-4) is a glycoprotein containing 153 amino acids (18-20 kDa). IL-4 is mainly secreted by activated T lymphocytes. IL-4 has the functions of regulating humoral immunity, eosinophils and macrophages. IL-4 cooperates with interleukin-3 to maintain and promote the proliferation of mast cells, which has certain significance in the occurrence of some allergic diseases. In addition, abnormal IL-4 is associated with a variety of autoimmune diseases, including asthma, type I diabetes, etc.

Interleukin-5 (IL-5) is a 40–45 kDa (monomer) glycoprotein that normally exists in a homodimeric conformation linked by interchain disulfide bonds. IL-5 is produced by activated T lymphocytes, mainly CD4 Th2 cells. IL-5 is the strongest cytokine controlling eosinophils. It is an important factor in eosinophil development, growth, maturation and activation. Since eosinophils play a key role in allergic diseases, IL-5 is one of the key cytokines in the development of asthma and allergy.

Interleukin-6 (IL-6) is a mediator of the immune system with a wide range of biological roles. IL-6 is a pleiotropic α-helical glycosylating cytokine involved in inflammation, acute-phase responses, and regulation of metabolic processes. IL-6 is involved in a variety of physiological processes, and can send signals to and activate other cells through the interaction of α-chain and ß-chain receptors. In the presence of interleukin-2, IL-6 promotes the differentiation of T cells into cytotoxic T cells and induces the proliferation of thymocytes. Following IL-4 stimulation, IL-6 is also required to stimulate B cells to differentiate into immunoglobulin-secreting plasma cells Serum or plasma IL-6 concentrations may occur in many acute and chronic diseases associated with inflammation elevated phenomena.

Interleukin 8 (IL-8) is an aglycosylated protein with a molecular weight of 8kDa. One of its most important biochemical roles is as a chemoattractant for neutrophils. Interleukin-8 is a member of the inflammatory chemokine superfamily, the molecular weight of which is between 8 and 10 kDa, and is also called pro-inflammatory cytokines. In addition to their biological roles as chemoattractants, these proteins also display 20-50% homology and a conserved 4-cysteine motif according to their amino acid sequences. The biological properties of interleukin-8 make it critical for its role in many infectious events.

IL-12 is a heterodimeric protein with two subunits, one a bit smaller than the other (p35/p40), and is referred to as IL-12p70. The main source of IL-12 is peripheral blood mononuclear cells stimulated by bacteria, intracellular parasites, or their products. It has an important proinflammatory role in innate immunity, and plays a fundamental role in the initiation of the protective immune response. Many actions and functions of IL-12, like for example the generation of Th1-type response, have been credited to IL-12. Excessive IL-12 production was found in several organ-specific autoimmune diseases.

IL-17 is a group of proinflammatory cytokines. IL-17A/F causes neutrophilia. IL-17A/F mobilizes granulocytes by granulopoesis, causes migration with CXC chemokines, and prolongs their lives in target tissues. It stimulates cyclooxygenase-2 (COX-2), as well as the production of nitric oxide (NO) and IL-6 in some target cells. High values have been found in chronic inflammation, including RA (RA resistant to anti-TNF therapy), psoriasis, and multiple sclerosis. Also, it has a potential role in periodontitis and muscle inflammation. Increased concentrations of IL-17 are also associated with cutaneous T lymphoma.

The interleukin 2 receptor is unique among growth factor receptors in that it consists of at least three distinct cell membrane components: the alpha chain (IL2Rα) – also known as the ac antigen (molecular weight 55kDa); the beta chain (IL2Rβ, molecular weight 70 -75kDa); and γ chain (IL2R-γ; molecular weight 64kDa). Different combinations of these three components form different morphologies of the IL-2 receptor, each with a different affinity for IL-2. Soluble interleukin-2 receptors are present at low levels in the serum of healthy individuals, and significantly elevated levels are seen in the following disorders: such as autoimmune diseases, organ transplant rejection and various infections. Therefore, soluble interleukin-2 receptors can be used as indicators of many disorders involving immune responses.

Interferon-α (alpha) is a group of about 20 highly related proteins. they are also called type I interferons. All members can bind to the single heterodimeric receptor to exert their action. All somatic nucleated cells can produce type I interferons. The primary function is to induce protection against viruses in neighboring, non-infected cells. IFN-α overproduction by pDC seems to have a pathogenic role in systemic lupus erythematosus (SLE), an autoimmune disease that can affect nearly every organ or tissue in the body.

IFN-γ is a homodimer composed of two anti-parallel chains with a molecular weight of 20–25 kDa (monomer has 123 amino acids in mouse, 147 in humans). It belongs to the type II interferons. It is secreted by Th1-type cells, cytotoxic Tc1 cells, and activated NK cells. Human DC type I cells secrete it under certain conditions, such as stimulation through TLR2. IFN-γ causes disruption of tight junctions between intestinal epithelial cells (with the help of TNF), and thereby allows the entry of bacteria into the tissues, which opens the possibility of contributing to development of inflammatory bowel disease (IBD).

In the denatured state, TNF-α is a 17 kDa aglycosylated protein. Its biologically active composition is in the form of trimers. In addition to the soluble component of TNF-α, there is a membrane-bound component with a molecular weight of 17 kDa on the surface of TNF-producing cells, which serves as a pool for solubilized TNF-α and is separated from the cell surface by proteolysis. The action of TNF-α occurs through two different receptors on the cell surface, which are called TNF-α receptor I (p55) and TNF-α receptor II (p75). These receptors are recognized on the surface of almost all cell types except red blood cells. Therefore, TNF-α exhibits various biological activities. TNF-α can enhance the proliferation of T cells after stimulation by IL-2, and in the absence of IL-2, TNF-α enhances the proliferation and differentiation of β cells. Elevated serum or plasma levels of TNF-α are seen in the following diseases: sepsis, autoimmune diseases, various infectious diseases and transplant rejection.