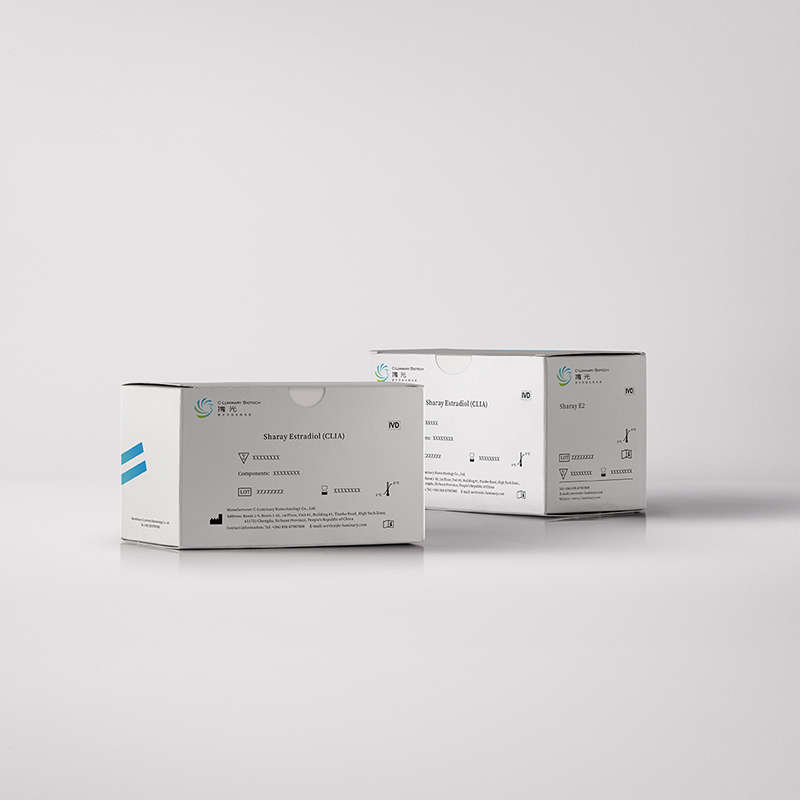 Follicle-stimulating hormone (FSH) and luteinizing hormone (LH) are secreted by the anterior pituitary gland. Follicle-stimulating hormone (FSH) belongs to the same family of gonadotropins as luteinizing hormone (LH), and they coordinately regulate and stimulate the development and function of the gonads (ovaries and testes). In women, FSH functions in the hypothalamic-pituitary-ovarian regulatory loop, promoting ovarian estrogen synthesis to control the menstrual cycle. The paroxysmal release of FSH and LH from pituitary gonadotropins is regulated by negative feedback of steroid hormones. FSH levels show a peak in the middle of the menstrual cycle, but not as pronounced as LH; due to changes in ovarian function and estrogen levels Decline, menopause FSH reaches high levels. FSH in men acts to induce spermatogonia development.

Testosterone (T) is mainly synthesized by Leydig cells in the male testis, and is also secreted in small amounts by the adrenal glands and female ovaries. More than 98% of testosterone is combined with albumin and sex hormone-binding protein after entering the blood, and a small amount (2%) exists in free form (FT). Conjugated testosterone (Alb-T) is biologically inactive and readily dissociates in the tissue capillary bed, releasing T for tissue utilization. Alb-T and FT are collectively referred to as bioavailable testosterone. In men, the main function of testosterone is to promote and maintain the development of male secondary sexual characteristics, maintain male sexual function, promote protein synthesis and bone marrow growth, and increase basal metabolism. In addition, testosterone, together with LH, promotes sperm formation and maturation, and is associated with sperm motility and seminiferous tubule metabolism. In women, testosterone plays an important role in maintaining normal growth and development and some metabolic regulation during puberty in women.

Estradiol (E2) is one of the most biologically active estrogens, mainly secreted by the ovaries, and also secreted in small amounts by the adrenal glands and male testes. 98% of the circulating blood is bound to albumin and SHBG, and only a small amount exists in the free state. E2 mainly promotes the growth of female reproductive epithelium, breast, uterus, long bones and the development of secondary sexual characteristics, participates in lipid metabolism, regulates many functions of vascular smooth muscle cells and endothelial cells, and plays a central role in the control mechanism of ovulation.

Progesterone (Prog) is mainly synthesized by luteal cells and placenta during pregnancy, and is the precursor of testosterone, estrogen and adrenal cortex hormones. The level of progesterone produced by normal men and women is very low, and after secretion into the blood, it is mainly bound to albumin and sex hormone-binding protein and circulates in the body. Progesterone levels are associated with the development and atrophy of the corpus luteum, but blood progesterone levels are low during ovulation in a woman’s menstrual cycle. Elevated levels of progesterone can be observed on the day before ovulation, and progesterone synthesis increases significantly during the luteal phase. During the menstrual cycle, the main role of progesterone is to promote the thickening of the endometrium, which causes the blood vessels and glands to proliferate, causing secretion to facilitate The fertilized egg (embryo) implants. During pregnancy, progesterone maintains pregnancy and inhibits myometrial contractions. Progesterone can also act on the mammary gland to promote the development of mammary acini and ducts to prepare for lactation.

Sex hormone-binding globulin (SHBG) is a protein that transports testosterone and estrogen (E2) in the blood. SHBG is primarily produced by the liver, and its synthesis and secretion are regulated by estrogen and negatively affected by hepatic fat content and inflammatory cytokines. Serum SHBG concentration correlates with hormone levels, liver function, and inflammation.

Prolactin (PRL) is shunted by adeno-pituitary cells and can promote the growth, development and differentiation of its target organ mammary gland tissue, and is an essential condition for normal breast development and women’s lactation. With the participation of estrogen, progesterone, glucocorticoid and insulin, PRL can promote the maturation of mammary vesicles and the secretion of milk, and play a role in maintaining milk secretion during lactation. If breastfeeding is not used, PRL levels return to normal within three weeks after delivery. In the presence of testosterone, PRL can promote the development of male prostate and seminal vesicles, and enhance the effect of LH on Leydig cells to increase testosterone synthesis. In addition, PRL also has the functions of regulating adrenal production of androgens and participating in stress response.

Human chorionic gonadotropin (HCG) is a glycoprotein hormone mainly produced by human placental trophoblast cells. The main function of HCG is to promote the transformation of the ovarian corpus luteum into the pregnancy corpus luteum, regulate the synthesis of steroid hormones, and prevent the fertilized egg implantation embryo from being rejected. In early pregnancy, maternal blood and urine HCG can increase rapidly, and gradually increase with the progress of pregnancy, peak at 8-10 weeks, and gradually decrease after the first three months.

Mullerian hormone (AMH), a member of the transforming growth factor beta superfamily, plays an important role in the development of gonadal organs and is one of the important markers of male and female gonadal function. In males, AMH is mainly produced by Leydig cells, beginning with embryogenesis and continuing throughout life; in male fetal development, AMH causes the degeneration of the Mullerian duct to form the normally developing male reproductive tract. In women, AMH is mainly produced by ovarian granulosa cells, with peak levels starting at puberty, then slowly decreasing with age and becoming almost undetectable after menopause.

Inhibin B (INHB) is a dimeric glycoprotein, a member of the β-transforming growth factor superfamily, involved in the regulation of testicular spermatogenesis, egg development, maturation, and ovulation, and is a cytokine closely related to pregnancy outcomes. In men, the level of INHB in blood and seminal plasma can reflect the spermatogenic function of the testis and is closely related to male fertility. In women, blood INHB levels are also closely associated with endometriosis, polycystic ovary syndrome (PCOS), and ovarian hyperstimulation syndrome (OHSS).

Free estriol (uE3) is mainly estriol secreted by fetal liver and placenta. Into the maternal and fetal blood circulation in a free manner. Pregnancy-associated plasma protein A (PAPP‑A) is a macromolecular glycoprotein mainly produced by the placenta and decidua. During pregnancy, PAPP-A is produced in large quantities by the decidua and released into the maternal circulation, where PAPP-A concentrations increased with increasing gestation until delivery. Free beta-human chorionic gonadotropin（free-β-HCG） is the beta subunit of HCG. uE3, PAPP‑A, free-β-HCG are of great value in prenatal screening to assess Down syndrome and other chromosomal abnormalities in the first and second trimesters.