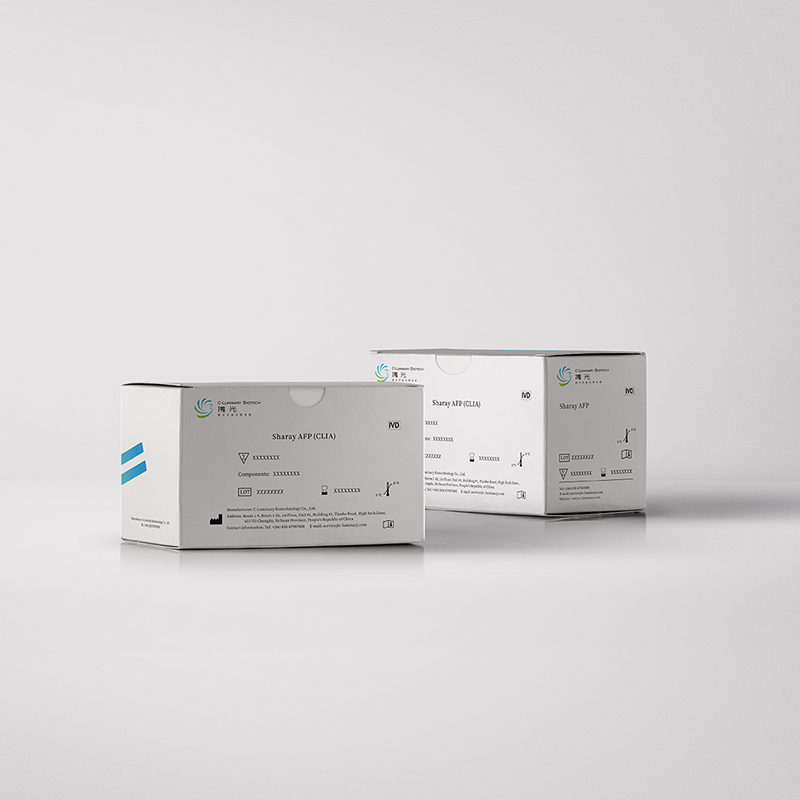 Tumor chemiluminescence immunoassay kits can detect a variety of tumor markers, which are mostly used for disease detection and efficacy evaluation in clinical practice.

The relative molecular mass of CA125 ranges from 200,000 to 1,000,000. It is a macromolecular glycoprotein with a ring structure and contains 24% of carbohydrates. It is a glycoprotein complex similar to mucin and belongs to IgG. The concentration of CA125 in healthy adults is less than 35U/mL. Serum CA125 in 90% of patients is related to the progression of the disease, so it is mostly used for disease detection and efficacy evaluation. The level of CA125 in 95% of healthy adult women is less than or equal to 40U/ml, and attention should be paid to if it rises to more than 2 times the normal value. In addition, CA125 can also be found in the serum examination of patients with tuberculous peritonitis, and the level of CA125 is increased by dozens of times. The possibility of tuberculous peritonitis and pelvic inflammatory disease should be clearly excluded before ovarian cancer surgery.

Carbohydrate antigen 199 (CA199) is an oligosaccharide tumor-associated antigen, a new tumor marker, a glycolipid on the cell membrane, with a molecular weight greater than 1000kD. It is the most sensitive marker for pancreatic cancer reported so far. It exists in the form of salivary mucin in serum. CA19-9 has high sensitivity and good specificity for pancreatic cancer, and its positive rate is between 85% and 95%, and it decreases with the improvement of the condition after surgery. Serum CA19-9 can be used as an auxiliary diagnostic index for malignant tumors such as pancreatic cancer and gallbladder cancer.

Prostate specific antigen (PSA) is a single-chain polypeptide containing 237 amino acids. It belongs to the serine protease family with tissue-specific chymotrypsin-like action. PSA is tissue-specific and only exists in the cytoplasm of human prostate acinar and duct epithelial cells, and is not expressed in other cells. PSA is a specific marker of prostate cancer, which is of great significance for the diagnosis of early asymptomatic prostate cancer.

Free PSA refers to the part of PSA that is free in plasma and not bound. Clinically, this difference is used to screen out early prostate cancer from patients with benign prostatic hyperplasia. Currently, the fPSA/tPSA ratio is widely used to assist in the identification of prostate cancer and benign hyperplasia.

Glycolytic enolase (2-phospho-D-glycerate hydrolase), molecular weight approximately 80 kD. NSE levels are low in the normal population or patients with benign disease, whereas neuron-specific enolase (NSE) levels are elevated in patients with neuroendocrine differentiated malignancies and is considered to be the main tumor marker for monitoring small cell bronchial carcinoma (SCLC) and neuroblastoma (NB).

Cytokeratin 19 fragment (CYFRA21-1) is the smallest member of the keratin family and is widely distributed on normal tissue surfaces such as lamellar or squamous epithelium. In pathological conditions, its soluble fragment CYFRA21-1 is released into the blood and can specifically bind to two monoclonal antibodies KS19.1 and BM19.21, which is the preferred tumor marker for the detection of non-small cell lung cancer. The main indication for the cytokeratin 19 fragment CYFRA21-1 is to monitor the course of non-small cell lung cancer (NSCLC).

Pepsinogen is immunologically divided into pepsinogen I (PG-I) and pepsinogen II (PG-II). Serum pepsinogen level reflects the morphology and function of gastric mucosa in different parts: PG-I is a pointer to detect the function of oxyntic gland cells, increased gastric acid secretion increases PG-I, decreased secretion or gastric mucosal gland atrophy PG -I decreased; PG-II had a greater correlation with gastric fundus mucosal lesions (relative to gastric antrum mucosa), and its increase was related to gastric fundus duct atrophy, gastric epithelial metaplasia or pseudopyloric gland metaplasia, and atypia; A progressive decrease in the PG-I/II ratio was associated with the progression of gastric mucosal atrophy. Therefore, the combined determination of the ratio of PG-I and PG-II can play the role of “serological biopsy” of the fundic gland mucosa and provide a reliable diagnostic value for clinical practice.

Squamous cell carcinoma antigen (SCCA) is a TA-4 subcomponent squamous carcinoma antigen extracted from cervical cancer metastases. It is a glycoprotein with a molecular weight of 48kDa and contains at least 14 components. Its isoelectric point ranges from 5.44 to 6.62. The isoelectric point is 6.62. SCCA is the earliest tumor marker used to diagnose squamous cell carcinoma. It can be used as an auxiliary diagnostic indicator and prognostic monitoring indicator for cervical cancer, lung cancer, and head and neck cancer.

β2-Microglobulin is a small molecular globulin produced by lymphocytes, platelets and polymorphonuclear leukocytes, with a molecular mass of 11800 and a single-chain polypeptide consisting of 99 amino acids. When kidney function is impaired, the level of β2-microglobulin is abnormally elevated. As a common tumor marker, β2-microglobulin is widely used for dynamic monitoring of various tumors to assist in judging the disease process or treatment effect.

When the patient suffers from liver cancer or is accompanied by liver cirrhosis, the oxygen diffusion in the liver tissue is impaired, and the hypoxia causes the liver function to decline, which in turn causes the disturbance of vitamin K uptake or utilization, resulting in PIVKA II. PIVKA II has a good diagnosis and treatment effect in distinguishing hepatocellular carcinoma from other liver diseases. PIVKA II is an independent predictor and diagnostic biomarker for the presence of liver cancer, and is used for early diagnosis of tumor therapy, disease assessment, preoperative treatment options, and patient survival prediction.

Ferritin is a large globular protein with a molecular weight of approximately 440 kDa composed of 24 non-covalently linked subunits. It consists of a protein coat of 24 subunits (apo-ferritin) and an iron core (ferritin in liver and spleen) containing an average of about 2500 Fe3+ ions. There was a significant positive correlation between age and serum ferritin levels in women, but not in men. The 400 ng/mL ferritin used as the threshold for high iron load in the body is indicated when the level of ferritin is elevated and the possibility of dysdistribution can be ruled out. Ferritin assays have proven valuable in liver metastases confirmation.

Gastrin-releasing peptide (GRP), a gastrointestinal hormone. Its pre-protein has 148 amino acids, and after cleavage of the signal peptide, it is further processed to generate 27 amino acid GRP and 68 amino acid proGRP. Due to the short half-life of gastrin-releasing peptide, only 2 minutes, it is impossible to detect it in blood. An assay was therefore developed to detect PRG, a carboxy-terminal region commonly found in three types of human PRP splice variants. Serum progastrin-releasing peptide has been shown to be a reliable marker for patients with small cell lung cancer (SCLC). proGRP and neuron-specific enolase (NSE) are two molecules associated with tissues and tumors of neuroendocrine origin.

CA50 is a sialic acid ester and sialic acid glycoprotein, which generally does not exist in normal tissues. When cells become malignant, glycosylase is activated, resulting in changes in cell surface glycosyl structure and becomes a CA50 marker.The carbohydrate antigen CA50 antigen is a non-specific broad-spectrum tumor marker, which has a certain cross-antigenicity with CA199.

CA242 is a sialylated carbohydrate antigen that is almost always expressed together with CA50, but the two are recognized by different monoclonal antibodies. It has been clinically used for the diagnosis of digestive tract malignant tumors, especially pancreatic cancer and colorectal cancer. Compared with CA19-9 and CA50, the new generation of CA242 has the sensitivity and specificity in pancreatic cancer, gallbladder cancer and digestive tract cancer.

Gastrin is a gastrointestinal hormone secreted by G cells in the gastric antrum and proximal duodenum mucosa. In gastrinoma, the synthesis and secretion of gastrin are significantly increased, accompanied by an increase in the secretion of basal gastric acid. According to the characteristics of high gastrin and high gastric acid, it can assist in the diagnosis and differential diagnosis of the disease, and monitor the curative effect.

Prostatic acid phosphatase (PAP) is a glycoprotein synthesized and secreted by mature prostate epithelial cells, enters the seminal vesicle through the prostate duct, and is excreted from the urethra. The serum PAP level in patients with prostate cancer was significantly increased, and the level of PAP increased with the progression of prostate cancer. It is suggested that the detection of serum PAP has certain clinical significance for the staging and prognosis of prostate cancer.

Human epidermal growth factor receptor-2 (HER2), also known as c-erB2, consists of 922 adenines, 1,382 cytosines, 1,346 guanines, and 880 thymines. is one of the most well-studied breast cancer genes to date. The HER2 gene is a prognostic indicator for clinical treatment monitoring and an important target for drug selection in tumor-targeted therapy. Serum HER2 is associated with tumor burden, histological HER2, and lymph node status in breast cancer patients, and may be an independent prognostic factor, which may have a certain impact on the efficacy of chemotherapy or endocrine therapy. HER2,

The molecular weight of tissue polypeptide antigen (TPA) is 17,000-43,000, and it is composed of three subunits, B1, B2 and C, and its activity is mainly in B1. TPA has the following clinical significance: the preoperative TPA increase in tumor patients is very significant, which often indicates a poor prognosis; after treatment, the TPA level increases again, indicating tumor recurrence; simultaneous detection with CEA can significantly improve The correctness of breast cancer diagnosis depends on the differential diagnosis between malignant and non-malignant breast lesions.